Diana reports from Washington DC on the US mid-term elections 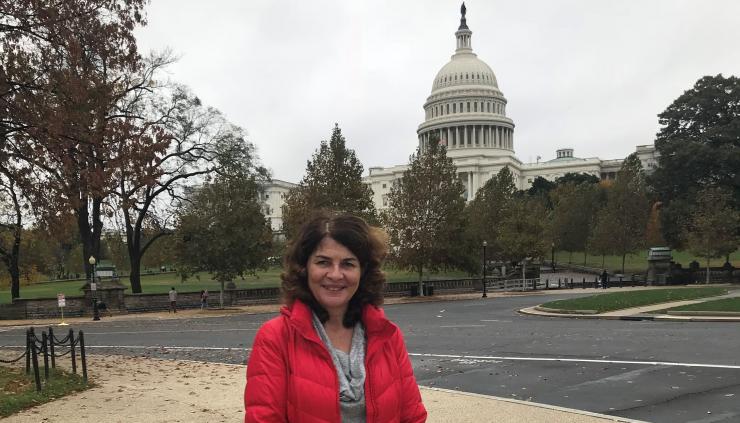 Diana Johnson MP has written the article below for Parliament's House Magazine on her work monitoring the US mid-term elections. It can also be read at https://www.politicshome.com/news/uk/foreign-affairs/house/99689/diana-johnson-dispatches-us-midterms

The Captain told our flight attendants to take their seats as we were experiencing 220 mile per hour winds 35,000 feet over the mid-Atlantic.

This announcement felt like an analogy for the turbulent state of US politics: a polarising President and a promise of major changes in the Mid-Term Elections on 6 November.
I was travelling to Washington DC as part of a Westminster delegation of Mid-Term Election observers from the Organisation for Security and Co-operation in Europe (OSCE).
After arriving, thankfully, on terra firma we spent the next two days being briefed.
All seats were up for election in the House of Representatives and a third of the Senate. We were advised that it looked like the House might 'flip', but that this was unlikely in the Senate because of the arithmetic in the seats up for election.
Leading up to polling day, the President had been campaigning much harder than is normal at this stage in the electoral cycle, whilst the Democrats deployed their 'rock star' campaigners such as President Obama and Oprah Winfrey.
The decentralised nature of US elections, to state and then county level, was striking. Up to 10,000 different bodies run their elections. A myriad of divergent rules apply. For example, polling hours vary widely between cities and counties in the same state. Early voting is available in many states for weeks beforehand and voters are able to register on Election Day in some places, such as Washington DC.
There is no equivalent of our Electoral Commission to oversee a fair process. Also international election observers are relatively new. Some states had declined to cooperate with the OSCE, despite the USA being a member of the OSCE!
Technology plays a bigger part in US elections than in the UK, with voting machines or scanners for paper ballots in polling stations. Our most notable briefing was from a hacker who told us candidly that all voting machines used in the USA are hackable. Worryingly, a few states have no paper trail and rely solely on often ageing and unreliable machines. Some just have postal ballots.
On Election Day, I was assigned to monitor the poll in Washington DC and Virginia, along with a Labour colleague. We spent the whole of Election Day travelling around polling stations to check that voters were able to access polling stations and could vote unimpeded.
Notwithstanding the weaknesses of the system, I was impressed by the way US elections are treated as a celebration of democracy cherished and hard-won. Many volunteers staff polling stations and greet and thank individuals for voting. Stickers saying "I voted" are handed out and worn with pride. I saw a first-time voter get a shout out from the polling clerk and a round of applause when she turned up to vote. There is also a tradition I saw in Virginia of fifteen and two minute 'shout outs' to ensure that people outside the polling station know that the poll is closing imminently.
On the whole in the areas I visited, I saw an orderly election with a real attempt to ensure that people could vote. There is widespread use of "provisional ballots" if there is a query over someone's right to vote, which are adjudicated on the next day. However, there are genuine concerns about deliberate voter suppression and technological vulnerabilities in different parts of the country.
Do Mid-Term elections matter? In short, yes. The House of Representatives did 'flip'. There will be now be more oversight of the President. Half-way through his first term, Trump's ride will get much bumpier leading up to 2020.
Diana Johnson
Labour MP for Hull North